Michel Gonin: From Neutrino to a Theory of Everything

Read this story in Chinese

On October 6, 2015, the Royal Swedish Academy of Sciences awarded this year’s Nobel Prize in Physics to Takaaki Kajita and Arthur B. McDonald in recognition of “the discovery of neutrino oscillations, which shows that neutrinos have mass.” Takaaki Kajita, along with fellow Japanese physicist Totsuka Yōji, observed neutrino oscillation in 1998 in the neutrino observatory Super-KamiokaNDE (Super-Kamioka Neutrino Detection Experiment, abbreviated to Super-K). 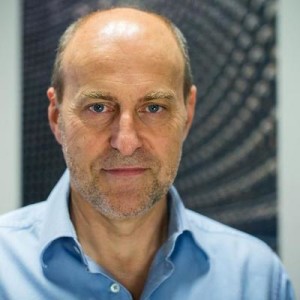 The following month,  SJTU ParisTech Review interviewed Dr. Michel Gonin, professor of physics at Ecole Polytechnique and director researcher at CNRS (National Scientific Research Center) of France. Dr. Michel Gonin obtained his doctorate in nuclear physics at the University of Strasbourg. He’s been a professor at Ecole Polytechnique since 2004 and a researcher in neutrino studies since 2005. Right before the interview, Dr. Gonin gave a lecture on neutrino oscillation at this school, and he accepted our reporters’ interview request three weeks ago. Dr. Gonin has participated actively in a series of experiments at Super-KamiokaNDE. The team with whom he works uses a particle accelerator to produce neutrino beams 300 kilometers away from the Super-K. The direction, the shape, and the intensity of these neutrino beams were carefully controlled so that they passed through stratum and reached the Super-K, where another team could continue further study.

“The only way to verify the model is to detect solar neutrinos.”

Neutrinos are particles barely known by the public. Some people might remember that in the doomsday movie 2012, neutrinos caused the apocalyptic destruction of human civilization. A super solar activity sparked the release of an enormous amount of neutrinos, which began heating the Earth’s core and led to a crushing of Earth’s plates within a few years.

This plot received serious criticism from NASA in 2011, and it is considered one of the most unscientific science-fiction films in recent memory. This is because as a neutral lepton, neutrinos are governed only by weak interaction and gravitational interaction, which are weak enough to be ignored at a subatomic scale. As a result, a neutrino can pass through ordinary matter without too many interactions, so it’s hard to even detect.

However, a scientific phenomenon called neutrino oscillation was successfully observed by Takaaki Kajita’s experiment in 1998 and Arthur B. McDonald’s experiment in 2001. These findings validated the physics model established long ago that describes the only star in our solar system – the sun. “Solar energy comes from the nuclear fusion process inside the sun,” Dr. Gonin said. “It’s a Helium producing factory. In the early 1960s, scientists wanted to verify the Standard Solar Model (SSM); that is to say to prove that the Sun is a fusion reactor, and the only way to verify the model is to detect solar neutrinos.”

The problem is that with calculation of the Standard Solar Model, we couldn’t ascertain the number of neutrinos arriving on Earth that match actual observation, which is called the “solar neutrino problem.” Finally, in 2002 this annoying problem that’s persisted since the 1960s was solved by Arthur B. McDonald’s SNO experiment.

“To win a Nobel Prize, one should be patient.”

It is quite common that people get a Nobel Prize many years after their scientific discovery. Isamu Akasaki was awarded the 2014 Physics Prize for his invention of the bright gallium nitride (GaN) p-n junction blue LED in 1998. Françoise Barré-Sinoussi was awarded the 2008 Medicine Prize for discovering the HIV virus in 1983. According to research published in Nature in 2014, people are waiting longer and longer for the Nobel Prize. In 1940, only 11% of the Nobel Prizes in physics, 15% of the prizes in chemistry, and 24% of the prizes in physiology or medicine were awarded more than 20 years after discovery. By 1985, these three numbers had risen to 60%, 52% and 45% respectively.

“The Nobel Committee is very cautious,” Gonin said. They do not want to see a Nobel Prize-winning discovery falsified a few years later. Therefore, winning a Nobel Prize often requires a lot of time, sometimes 30 or even 40 years. It could happen, unfortunately, that one of the main participants has already passed away and will not be able to win the Nobel Prize, since the Prize is only awarded to living scientists.”
“To win a Nobel Prize, one should be patient.”

“In China, we use a nuclear reactor.”

Being patient in waiting for a final vindication of their discovery is not the only thing that scientists need. During the whole process of research, such a huge team may easily encounter other difficulties. “For example, when we were about to launch the T2K project where we finally observed the μ neutrino, the first difficulty we met was with the project’s funding,” Gonin said. As a cutting-edge research problem in modern physics, neutrino study requires huge financial support. This means that Dr. Gonin and his team need to persuade different countries — especially the heads of neutrino research in those countries — to fund the project. There are more than 20 countries as members of the T2K project, such as Japan, America, Canada and some from Europe and South America, from which the T2K team can apply for financial support. “First we need to convince the person in charge of scientific research that this is an interesting research topic so that they are willing to invest in the project.”

Financing leading physics research projects like those on neutrinos is definitely an investment. Besides the T2K project, Dr. Gonin also participates in another neutrino research team named JUNO in China. JUNO is short for Jiangmen Underground Neutrino Observatory, which was launched one year ago. According to JUNO’s official website, it is a multipurpose neutrino experiment designed to determine neutrino mass hierarchy and observe supernova neutrinos, study the atmosphere, solar neutrinos and geo-neutrinos, and perform exotic searches.

“In Japan (with Super-K) we generate neutrinos with an accelerator. In China, we use a nuclear reactor.” JUNO’s team will precisely measure oscillation parameters by detecting reactor neutrinos from the Yangjiang and Taishan nuclear power plants in order to determine neutrino mass hierarchy. JUNO’s first experiment is planned to begin in 2019.

The Chinese Academy of Sciences (CAS) has injected considerable funds into the JUNO project amounting to about 350 million dollars. “The next research project in Japan will use an observatory called ‘Ultra-Kamioka’ and in the US there will be another neutrino project named DUNE (Deep Underground Neutrino Experiment),” Gonin said. “1 billion dollars is supposed to be invested.”

The difficulty in receiving funding is not only because of the scope, but also because of the specialty of neutrino research (as well as other theoretical physics research). “For the moment, the prospect of this theoretical discovery is still hard to predict,” says Gonin. Even in a world famous higher education institution, research on neutrinos is not something in which everyone can get involved. It helps particle physicists explore the microscopic structure of the material and helps astrophysicists understand the evolution of stars and the universe, but it’s only ever attached to theoretical research. “At present, this discovery has yet to be applied,” Dr. Gonin said. “In fact many discoveries only become practically applicable after 40 years.”

Of course, this doesn’t mean that neutrino research is meant to exist only on scientists’ blackboards and scratch papers. “For example, we can realize instant communication by using neutrinos because they almost never interact with materials. We can also use neutrinos to verify whether a country has an atomic bomb or not.” However, when it comes to civil applications, there’s not much foreseen in the near future.

“There is another problem we encountered in Japan: the earthquake in 2011,” Gonin said. On March 11, 2011, a magnitude 9.0 (Mw) undersea earthquake hit off the coast of Japan followed by tsunamis and the Fukushima nuclear accident. This caused many problems in data collection for the T2K team and unfortunately delayed the project by one year. The research group also faced technical problems regarding particle acceleration, communication, and cooperation between research teams from different countries, in addition to other issues. Fortunately, after these difficulties were addressed one –by-one, the T2K project ultimately succeeded with significant experimental results.

“We don’t know why neutrinos have mass.”

Nobel Prizes have been awarded for discoveries in the field of neutrinos on several occasions. American scientist Clyde Cowan Jr. and Frederick Reines observed an induced neutrino reaction in 1956, which was the first experiment to confirm the existence of neutrinos. After almost 40 years, they obtained the 1995 Nobel Prize in Physics. In 1962, American physicist Leon Lederman and his team found different types of neutrinos and were awarded the 1988 Nobel Prize in Physics. In 2002, American scientist Raymond Davis Jr. and Japanese scientist Masatoshi Koshiba won a Nobel Prize for their pioneering contribution to neutrino astronomy. Then the 2015 Nobel Prize was given to the two scientists for discovering the phenomenon of neutrino oscillation, proving that the mass of neutrinos isn’t equal to zero. However, why does neutrino have mass, and where does it come from? No one can answer that question, and that’s why research on neutrinos, as well as other elementary particles, is still the focus of the global scientific community.

When it comes to elementary particle research, there is one scientific project that should always be mentioned. In Geneva, Switzerland in the depths of the Alps is the Large Hadron Collider (LHC) of the European Organization for Nuclear Research (CERN). This huge particle collider with a circumference of 27 kilometers cost 8 billion dollars in total. Several experiments have been conducted since 2008. In the fictional novel Angles and Demons by Dan Brown, published in 2000, it is at LHC that the antimatter which almost destroys Vatican City was produced.

In reality, the LHC team has had some remarkable discoveries. In March 2013, CERN announced that the new particle they detected in July 2012 was the Higgs boson, which is frequently called the “God particle” by the media since it plays a critical role in today’s particle physics research. Higgs boson is important for us in understanding the structure of matter, but it’s also extremely elusive. “Higgs boson can explain why some particles have mass, but it can’t explain why neutrinos have mass,” Gonin says. “So we need to find another explanation.”

Some physicists believe that neutrinos are closely linked with a Theory of Everything. Physicists have long hoped to include four fundamental interactions (gravitational, electromagnetic, strong nuclear, and weak nuclear) under one unified theory. Since Einstein, a Grand Unified Theory has been the ultimate target of modern physics. “We believe that there is only one force at the beginning of the universe. It is ‘The Force,’ as seen in Star Wars,” Dr. Gonin joked. So far, a Theory of Everything is still not achievable because gravity can’t be unified with other interactions yet. Therefore, particle physicists expect that ongoing experiments on new particles can provide new ideas for the study on a Theory of Everything.

New ideas imply further exploration. The “Nobel Prize Fever” of neutrino research will gradually subside, but research on this cutting edge topic will never abate. Despite uncertain prospects regarding neutrino research and all the theoretical puzzles that have yet to be explained, “this discovery has changed a lot,” said Dr. Gonin. If the truth is knowable for human beings, then we are definitely one step closer to it. (Reporter: Wong Haosen, Jiang Xianghe) Auch ägypter, babylonier, chinesen und inder nutzten das eisen als gebrauchsmetall, sodass kupfer und bronzen an bedeutung Seite web verloren.

Product strategy in a connected world: Where Software and Hardware Collide NEXT STORY