Ask any business in the United States or other major market about cloud usage, and many will claim that it’s already standard. But that’s not the case in China, where most companies still rely on local computing in their own data centers. For Chinese business leaders, the hesitation to adopt cloud technologies isn’t just an IT issue—it’s at the root of a much larger problem.

Read this article in Chinese 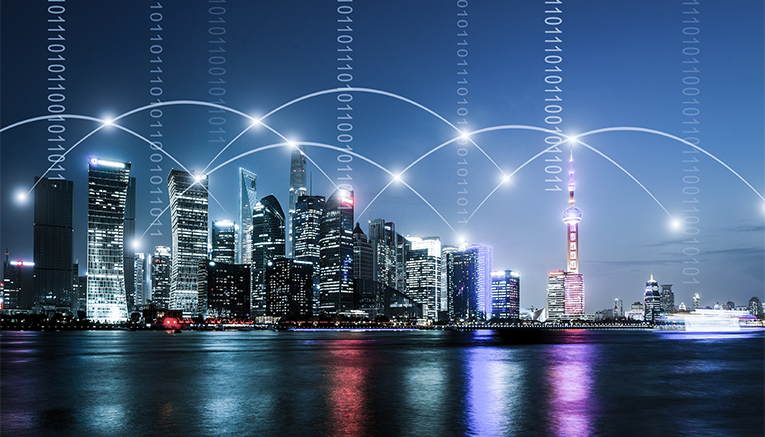 Ask any business in the United States or other major market about cloud usage, and many will claim that it’s already standard. But that’s not the case in China, where most companies still rely on local computing in their own data centers. For Chinese business leaders, the hesitation to adopt cloud technologies isn’t just an IT issue—it’s at the root of a much larger problem. Although China is technologically advanced in many respects, with the world’s largest e-commerce market and a thriving mobile-payments landscape, businesses have been slow to invest in IT initiatives that improve operational efficiencies or provide a competitive advantage, including those related to automation or advanced analytics.[1]China’s delay in moving to the enterprise cloud is one major factor behind the low digitization rates.

That may soon change, however. Within the technology sector, Chinese business leaders now acknowledge that their low cloud-usage rates are an increasing liability. They’re demonstrating their concern by increased investment in both the public and private cloud—and they might leapfrog their global peers. Even the Chinese government has taken note of the cloud’s importance and has stated its commitment to growth. According to an action plan issued by the Chinese Ministry of Industry and Information Technology, officials want to increase the scale of the cloud-computing industry more than 2.5 times by 2019, compared with 2015 levels.[2]

For public-cloud providers, these trends represent an important opportunity. Although most Chinese companies now prefer the private cloud, analysts predict that public-usage rates could rise more than 20 percent annually over the next three years. The major public-cloud providers, both local and global, are already moving aggressively to capture business. To gain more insight into this vibrant market, we researched the current state of the enterprise cloud in China, looking at trends related to both private and public usage. We also conducted a cross-industry survey of over 500 Chinese enterprises, with a deep dive on approximately 120 players that spent more than 1 million renminbi (about $154,000) on cloud services (see sidebar, “Our survey methodology”). Here’s what we found.

Market snapshot: The current state of the Chinese cloud

China’s recent cloud growth initially seems impressive. The country devoted around 14 percent of its total IT budget to cloud services in 2017—more than double the amount spent in 2013. But even with this growth, China still lags behind its global peers in cloud expenditures. In the United States, for instance, cloud spending accounted for around 29 percent of the total IT budget in 2017, up from around 14 percent in 2013 (Exhibit 1). 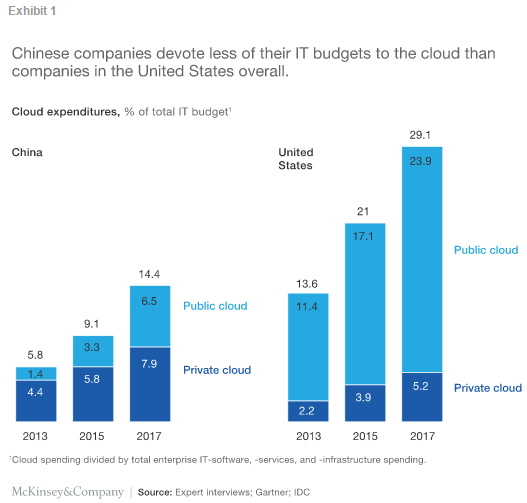 This snapshot of the Chinese cloud shows where things are now, but it doesn’t reveal what’s ahead. While the potential opportunities for public-cloud providers appear enormous, competition is already so intense that leading players dropped their prices by more than 30 percent in 2017.[3]Our survey provides some insight into the opportunities and challenges ahead.

All public-cloud providers will continue to find opportunities, regardless of size or location

One survey finding should give hope to all players: the door is open to any qualified provider in China, regardless of size or country of origin. In our survey, respondents reported that four Chinese providers now receive about 64 percent of their public-cloud spend (Exhibit 2). The remainder went to multinationals and other Chinese players. Respondents anticipated that the breakdown would be roughly similar three years from now. 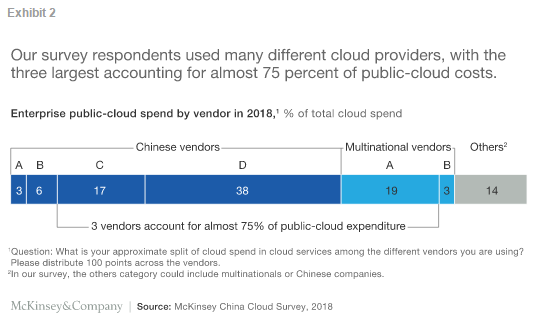 In the future, the public-cloud market should remain wide open, largely in line with the pattern seen today. Although over half the respondents in our survey said that they wanted to work with large-scale Chinese vendors over the long term, 30 percent stated that they’d prefer to engage with global players that had facilities in China and license to operate there (Exhibit 3). Smaller Chinese players will also find a place in the future market, since they were the top choice for 16 percent of respondents. 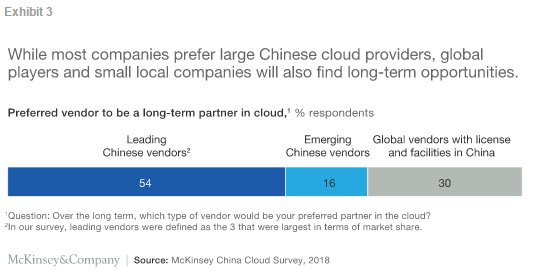 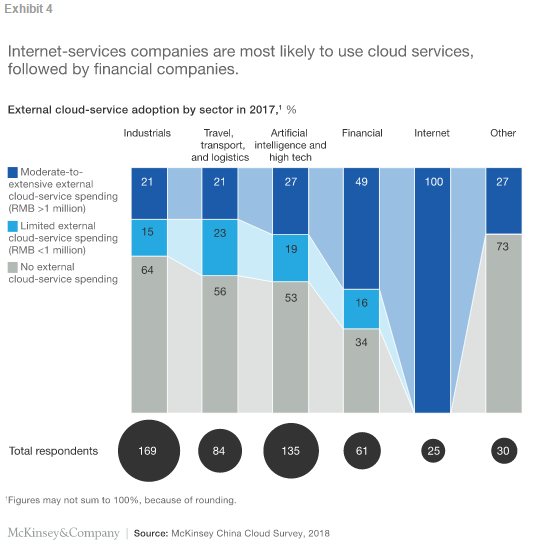 We also identified cloud patterns associated with IT workloads. Using IT spending as a proxy for growth, we asked survey respondents which workloads now received the most funding and whether this would change in 2021. They anticipated some of the greatest increases to be in consumer applications, big data, and business intelligence over the next three years (Exhibit 5). This trend correlates with the Chinese government’s push to expand cloud use in these areas to promote GDP growth. 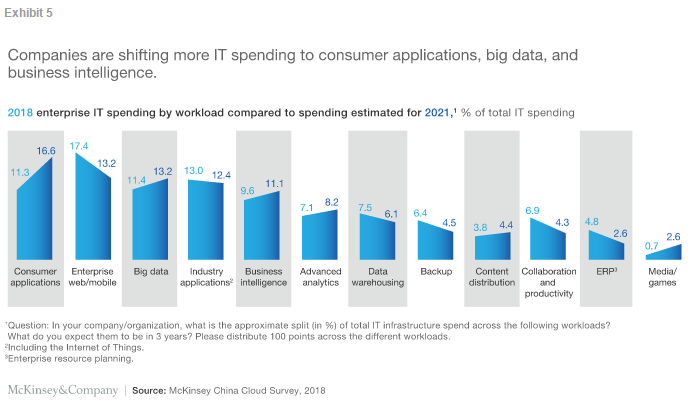 Public-cloud providers aren’t just competing against one another—they also have to overcome the reluctance of companies to move to the cloud. While Chinese businesses may have multiple reasons for wanting to delay migration, our survey suggests that two are particularly important (Exhibit 6). 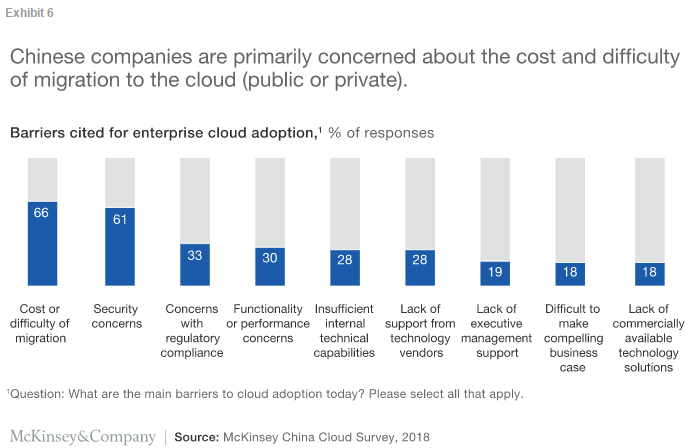 First, there’s the cost and difficulty of migration, which 66 percent of respondents identified as a major barrier to cloud usage. Their concerns are justified, since most Chinese companies have less advanced technology stacks, with most lacking a standard virtualized or containerized workload. These factors complicate all migrations, but the problems tend to be most severe when using a public-cloud provider. On the cost side, Chinese companies face big expenses during cloud migration because they must typically build or create most hardware and software necessary for the shift. That means public-cloud vendors in China can’t claim that their services will reduce IT costs, at least over the first few years of migration, as they do in other countries.

The second major concern relates to security, which 61 percent of respondents cited as a barrier. This finding sharply differentiates China from the United States, where public-cloud providers now offer sophisticated security solutions that enterprises often cite as a benefit. Several factors may explain why our survey respondents lacked confidence in cloud security. First, both local and multinational players in the Chinese market vary in their ability to manage security challenges, so enterprises are naturally concerned that their chosen provider might lack essential capabilities. Their fear of poor security is also heightened because enterprises in China must follow strict data-transmission and storage requirements to meet local regulatory requirements. They can’t risk selecting a public-cloud provider that might put them afoul of government standards. It’s possible that US providers might allay some of these concerns if they describe their security capabilities to Chinese enterprises.

While migration difficulties and security concerns won’t discourage all companies from moving to the public cloud, adoption could be slow. In many cases, the hybrid cloud may emerge as the preferred alternative, since it provides the best of both worlds. For highly sensitive information, companies can maintain private firewalls and control third-party access. At the same time, they can take advantage of the public cloud’s scale and low-cost compute power for less sensitive information. In our survey, IT decision makers often indicated that they wanted IT-services companies to provide the expertise required to design and implement hybrid solutions so they could optimize their total cloud spending.

Enterprises are open to different working models and prioritize performance

Public-cloud providers are increasingly investing in specific areas, such asartificial intelligence and the management of large data sets, to differentiate themselves from the competition. However, our survey found that Chinese companies did not always require their vendors to have such specialized knowledge. When asked whether they’d prefer to work with a single vendor or a combination of companies that can provide “best of breed” capabilities, they were almost evenly split (Exhibit 7). 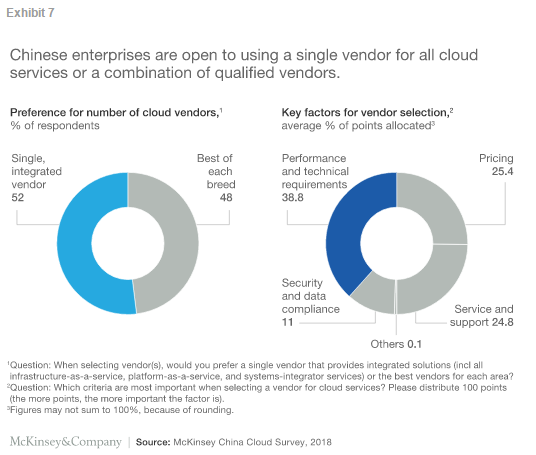 For vendor-selection criteria, most respondents stated that performance and technical requirements were the top considerations—a finding that would likely be replicated in most countries. Pricing was in second place, closely followed by service and support.

Next step for cloud vendors

Chinese businesses are at different points in their cloud-migration journey, with some having advanced capabilities and others still taking their first tentative steps. Likewise, their needs and requirements will vary. Although public-cloud vendors won’t find a single recipe for success in this heterogeneous market, our survey suggests that they’ll improve their odds by keeping the following points in mind:

China is among the top three countries in the world for venture-capital investment in major digital technologies, including artificial intelligence.[4]That alone shows a real belief in the power of technology. Paradoxically, however, Chinese businesses have been slow to use these solutions.[5]It’s only recently that they’ve begun to acknowledge the danger of falling behind and devoted more attention to the cloud. Public-cloud vendors—global and local, large and small—can capitalize on this opportunity, but technical prowess alone won’t be enough to win. They’ll also have to create an ecosystem that contains system integrators and solution providers with specific industry expertise that can help turn technology investment into business profits. Together, they can unlock value from the public cloud.

This article was published originally in the McKinsey Quarterly. Republished by authorization. All rights reserved.

Image from internet and copyrights belong to the original authors.

Humans Plus Robots: Why the Two Are Better Than Either One Alone
邮件 RSS 微信 微博 Facebook Twitter